Following Windjammers extraordinary welcoming to Newfoundland, we headed south-east to where North America meets France. With Brie, baguettes and Bordeaux in mind, we set sail for St Pierre, one of the last two remaining islands belonging to the French empire in North America. St Pierre is like a little piece of Europe on the opposite side of the Atlantic. The smell of freshly baked bread and croissants seduces your senses whilst meandering through the cobble stone streets of the old town, the locals greet you with a smiling ‘bonjour’ as they pass by. We befriended a local Basque fisherman who retired from the trade to open his own bar, he is renowned for his heavy hand when pouring a good rum. He bragged about his cooking and proceeded to invite us back for lunch the following day. When asked why he did not open a restaurant, he simply replied ‘because if people didn’t like my food, I would have to kill them’.

Windjammer’s cellar had been cleaned out for the opportunity to refuel with France’s best. And so, over 100L of red wine and rum were eagerly sourced and stowed; in hope of satisfying six thirsty sailors for 3 months of cold climate sailing. Let’s just say that we did our duty of upholding the stereotype that is of both sailors and Australian’s.

Threats of gale force winds caused us to delay our departure from St Pierre, putting us slightly behind schedule for our Arctic adventure. We spent the day making use of the yacht clubs showers and internet before we cast off the lines early the following morning, and said a final farewell to this delightful french island.

St Johns was our next destination, a two day passage north along the east coast of Newfound to the provinces capital. With unfavourable wind conditions and minimal breeze, the sound of the engine roared through the wooden floorboards as we stood our watches through thick lingering fog. Huge swells sent Windjammer rolling though the waves forcing the crew to quickly adjust to the unstable conditions. Late afternoon the wind came around and the great King Neptune finally answered our prayers. The sail covers came off, the three glorious white sails were hauled and the roar of the engine was finally no more. There was wind in the sails and a firm grip on the charming wooden helm as we sailed through the night. The fog cleared by morning and the weather was kinder, allowing us to shed a couple of layers and move more easily about the boat. Now that we were sailing, the uncomfortable and unstable rolling soon transitioned to a pleasant and soothing motion. With the help of the heater, the more favourable conditions were sending the crew into a sleepy trance whilst they waited to be called up to their watch. 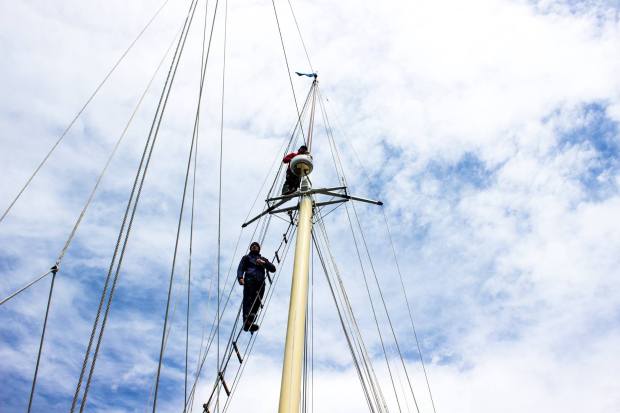